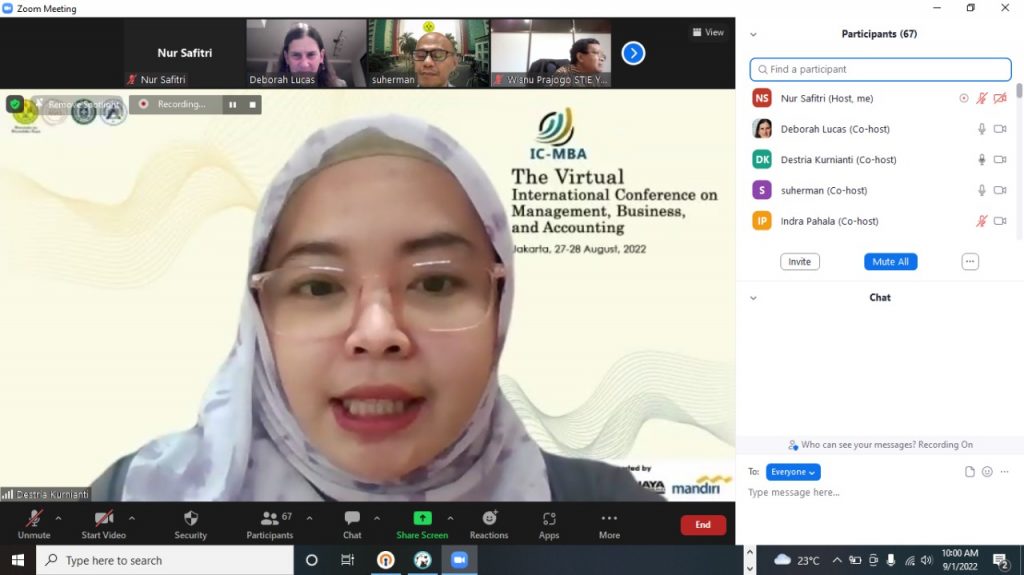 Thursday, 1 September 2022, at 10.00am – 11.30am, in order to implement the cooperation agreement (Letter of Intent) between 1)S1 Management study program FE Universitas Negeri Jakarta & Department of Finance FBE University of Malaya, and 2)S1 Management study program FEUNJ & program study of Financial Management & Banking FBEA University of Malaysia Sabah, we jointly organized the lecture with the title “Credit Policy as Fiscal Policy: Evaluating the Effects of International Credit Support Programs During COVID-19”. The speaker was Professor Deborah J.  Lucas (MIT Sloan School of Management). Lucas estimates the fiscal cost of credit support programs, focusing on the largest credit guarantee programs introduced during the COVID-19 pandemic in the five largest countries in Europe (France, Germany, Italy, Spain, and the United Kingdom), Japan, and the US. Specifically, the speaker estimates the upfront fiscal cost or subsidy element for each program. The main findings can be summarized as follows: First, the take-up in many credit programs was far smaller than the program envelope. Second, take-up and subsidy elements varied widely across programs within a single country, reflecting the significant variation in program parameters. As would be expected, programs with relatively generous terms–such as highly subsidized interest rates, relaxed eligibility criteria, and long maturities–had higher take-up rates and a higher subsidy element, whereas programs with stricter eligibility criteria and less favorable terms had much lower take-up and lower subsidies. However, even after taking into account program differences, considerable variation in take-up rates remain. Third, take-up and subsidy elements varied widely across countries. Presumably, some of those differences were intentional, as governments sought to balance the attractiveness or accessibility of loans with the fiscal risks the programs entailed. There is variation even across EU countries that shared a common “Temporary Framework” for pandemic credit programs. In fact, the authors find that in some cases, the measures that seemed superficially the most generous because of their very large envelopes had relatively unattractive terms and low take-up rates. Fourth, at inception the programs had the potential to adversely effect on long-term fiscal sustainability. The total credit envelope, which exceeded 30% of GDP in some countries, is a loose upper bound on loss exposure. While losses of that magnitude were highly unlikely to occur, significant losses could have been realized if the recession had been deeper and take-up rates higher. However, based on realized take-up and current economic conditions, the long-term fiscal impacts are likely to be modest.